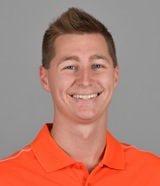 When Kyle Garase received an invitation to attend a Total Performance Elite Swim Camp after his junior year of high school, he jumped at the chance to try something new and learn more about swimming.  He attended the Elite Sprint camp and the Elite I.M. camp in 2011 and 2012.  The camps inspired him to pursue college swimming where he continued to improve at St. Vincent College in Pennsylvania.

After his junior year of college, Garase wanted to "do something to help me give back to a sport that changed my life."  He remembered the impact that his Total Performance swim camp counselors made on his swimming career, so he applied to be a camp counselor.  "This would give me the chance to make a difference in someone's camp experience, just as the counselors did for me."  Not only did Garase enjoy being a camp counselor, but he found that working the camps at Kenyon helped him discover a passion for coaching.

After finishing his college swimming career, Garase was applying for coaching positions at colleges across the country, and landed his first Assistant Coaching job at Hope College in Michigan.  Total Performance Swim Camps is fortunate to have had many former campers who return work as counselors.  And Kyle is not the only former camper turned college coach, as our 2018 Elite camp director Tracy Menzel can attest.  She was a former Elite camper before becoming a National Champion swimmer at Kenyon, an Elite Camp counselor during college, and eventually landing a career as a collegiate swim coach at Berkeley, Rutgers, Kenyon and now Head Swimming Coach at DePauw.  Our staff is passionate about swimming, coaching and performance, and they find inspiration in every camp season.