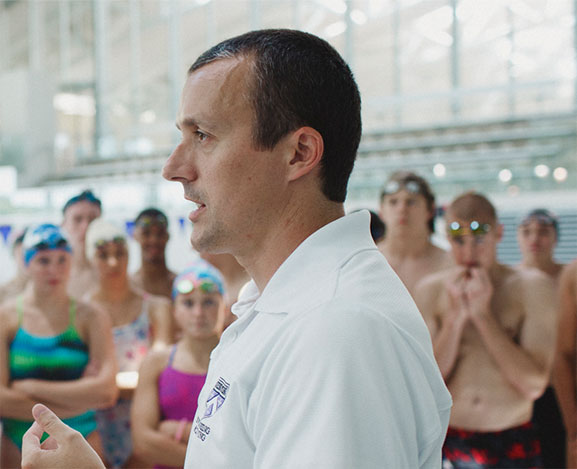 Coach Book is the Head Coach of the men's and women's swimming teams at Kenyon College.  At the conclusion of his first season coaching both the Lords and Ladies programs, Jess Book was voted the 2013 NCAA Men’s Coach of the Year and the 2013 NCAA Women’s Coach of the Year for their inspiring performances at Nationals. In doing so, he became the first Division III coach to earn both awards in the same season since the NCAA combined the men’s and women’s championship meets.  The NCAA team title was a first for Book, as a head coach, and was the record-setting 32nd for the Lords program.  The men's team has continued to claim the first place podium at NCAAS in the 2014 and 2015 seasons.

On the women’s side, Book was hired as head coach of the Ladies beginning with the 2010-11 season. At the national level, he directed the Kenyon women to back-to-back fourth-place finishes in his first two seasons. In 2013, however, the Ladies took the NCAA by storm, setting over a dozen College records and claiming the runner-up spot in the team standings. Two Kenyon swimmers, a diver, and two relay teams claimed event titles during that 2013 championship meet.  At the end of the 2012-13 season, Book had three swimmers earn NCAA Postgraduate Scholarships and two named to the Capital One Academic All-America Team. A total of 28 Kenyon male and female swimmers were named to CSCAA All-America teams. 2019 Coach Book was again voted NCAA Women’s Coach of the Year for their second place finish at the NCAA Championships.

Prior to taking the head coaching position at Kenyon, Book was the assistant men's coach at The Ohio State University from 2008 to 2010. During his tenure with OSU, Book helped the Buckeyes improve from fifth place to first place at the Big Ten Championships and from twenty-first place to ninth place at NCAA Championship meet.